Discussion on Migration of stkATOM from Ethereum to Persistence Core-1

This is a discussion post to gather feedback for Migration of the current implementation of pSTAKE for liquid-staked ATOM on Ethereum (to be referred as stkATOM(ERC-20)) to the Persistence Core-1 chain (to be referred as stkATOM). Upon sufficient discussion with the community, a proposal incorporating all the feedback and suggestions will be created on the pSTAKE Snapshot space for the community to vote on.

pSTAKE was early to liquid staking, with stkATOM(ERC-20) being the first implementation of a liquid-staked representative of ATOM. Back in 2021, the pSTAKE team decided to issue these tokens on the Ethereum chain due to the following reasons:

Going ahead with the issuance on a Cosmos-based chain or the Cosmos Hub would not have achieved the true potential and promise of liquid staking.

Post the Mainnet launch of stkATOM(ERC-20); users were able to stake their ATOM to help secure the Cosmos Hub and receive liquidity on their stkATOM(ERC-20) via the stkATOM(ERC-20)/ETH pool on SushiSwap at the same time. But this breakthrough brought certain tradeoffs for our users:

These drawbacks were foreign to our users as they were accustomed to low fees, fast transactions, and a seamless user experience in the Cosmos Ecosystem. Despite this, stkATOM(ERC-20) managed to hit the following milestones at its peak:

But since then, the developments in the Cosmos Ecosystem have been exponential with AMMs and DEXs like Osmosis, Crescent, SifDEX, JunoSwap, Borrow and Lending protocols like Umee, Mars, Hard, and DeFi Infrastructure and Smart Contract platforms like Secret, Juno, Kujira, Evmos and many more.

To tackle the above-mentioned issues and offer our users a better liquid staking experience, we proposes the following Migration.

Migration of stkATOM(ERC-20) to Persistence Core-1

What does Migration mean?

The transfer of underlying staked ATOM from the Cosmos MPC bridge wallet address of the current implementation to the new staking wallet address within Cosmos.

Why is Migration necessary?

In the absence of Migration, there will be two existing stkATOMs that won’t be fungible as the underlying implementations, validator delegations, custody mechanisms, etc., would be different. The Migration will overcome the before-mentioned drawbacks of stkATOM(ERC-20) and will empower our users with an IBC-native stkATOM that leverages the Cosmos tech stack and the vibrant ecosystem.

The Migration of stkATOM(ERC-20) to stkATOM will transfer merits such as enhanced UX, low-cost and fast transactions, higher security, IBC interoperability, and more excellent utility to our existing users.

We want the entire Migration process to be as frictionless and seamless as possible for our users. In line with that, we suggest the following three options to go ahead with the Migration. After sufficient discussion, the best possible way with all feedback points will be put as a pSTAKE governance proposal.

The first way is to build a Migration utility from scratch that goes live on the pSTAKE web app.

The proposed Migration flow has two vital events that influence the timeline:

This means our users would be able to have their stkATOM(ERC-20) transferred to stkATOM on the new product launch day itself. It would require a buffer of ~50-80 days before the launch of stkATOM. This means fixing a launch date ~7-11 weeks prior. This might not be feasible and carries risk due to the following reasons:

This means our users would be able to have their stkATOM(ERC-20) transferred to stkATOM a few weeks after the new product launch. We think that this option is more secure and feasible for the following reasons:

Keeping the security of our users’ assets in mind and giving them a choice to go ahead with the Migration or not, we propose that the Migration happen post stkATOM launch.

A proposal for the Migration will be posted after incorporating feedback from all stakeholders. If all stakeholders are well aligned, this can be done as early as two weeks from writing this post. If the proposal passes, it will give users a fixed amount of time (one or two months) before the Migration start date to unbond their assets if they do not wish to go ahead with the Migration. After which, steps 3-10, as mentioned above, would be followed. This would mean that our users receive their stkATOM 2-6 weeks post-launch, depending on the time for vital event 1 mentioned above.

From a stkATOM(ERC-20) user’s perspective 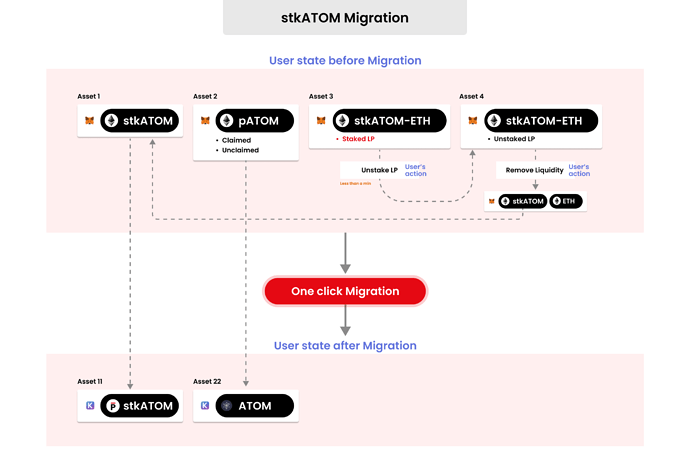 Option 2: Leave it to our users

With this, we have highlighted what Migration is, why it is necessary, and possible options for how and when it would take place. We intend this post to be an open discussion with all stakeholders involved—our users, validators, and the Cosmos community members to provide their inputs to finalize a flow and timeline for the Migration of stkATOM(ERC-20) to stkATOM.

We would like to express that we are leaning towards the proposed Migration utility (Option 1) as it provides a one-click frictionless experience for our users and reimburses for missed staking rewards without compromising security. We believe these extra efforts from an engineering perspective will be a much smoother approach than the other two options and will be the most viable path for the Migration of stkATOM(ERC-20) to Persistence Core-1 chain implementation.

We hereby look forward to your feedback.

It seems like either Option 1 or Option 2 would be the ideal paths as then pSTAKE can take matters in their own hands.

Would it be possible to just track the users who have staked with old stkATOM and compensate them as they go through Option 2? It seems like Option 2 is the quickest to market which I think is critical.